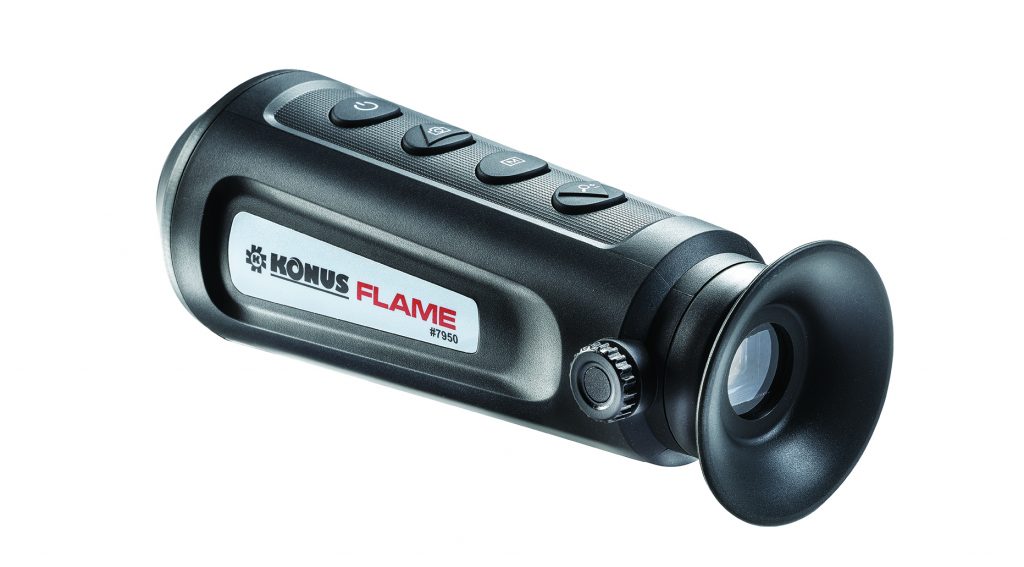 Among the Konus novelties for 2021, the Flame thermal viewers stand out as never beforehas Konus tried its hand at this type of product. These are two models that, in addition to the attractive price, can offer much more.

First of all, remember that the thermal scope is not intended merely for a hunting use, but it is also important to think about the usefulness it can have in the field of surveillance, investigations or rescue operations as well as for the verification of thermal systems

When we try one of our headsets, the first thing we are told is “how easy it is to use!” a sign that there are too complex models around that are often set aside due to the lack of time and desire in dealing with complicated manuals and juggling difficult indications. The Flame range is also designed for those who for the first time pick up a thermal viewer, without presumption, will be able to use it immediately by exploiting all its functions. Hyper-specialized tools can often discourage the so-called average user and therefore we are sure that the immediacy in understanding how this tool works will be the first point for Konus. 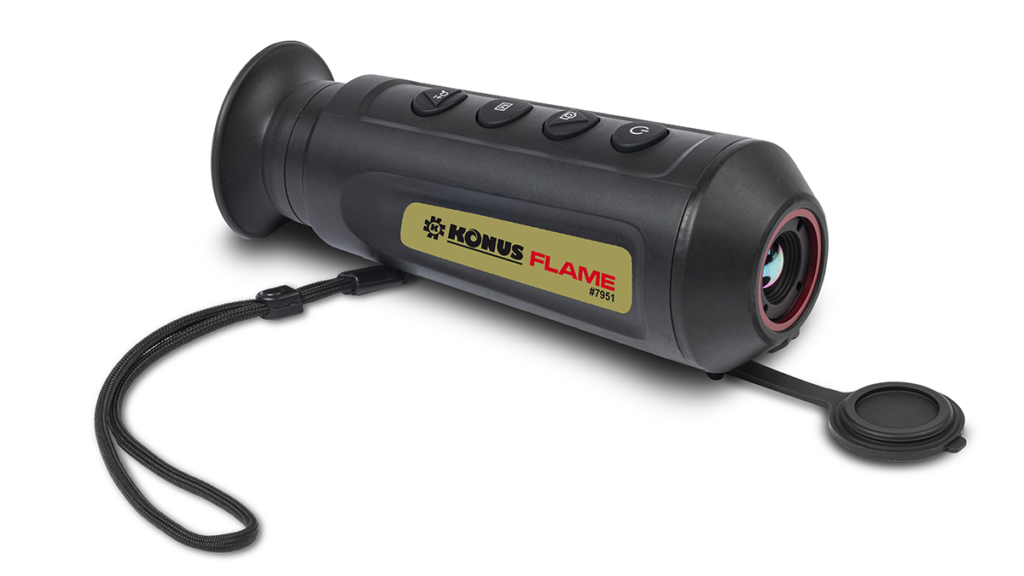 The most important aspects that should be highlighted are certainly the resolution of 384×388 pixels(# 7951) which make it a latest generation product, as well as the integrated internal memory of 16GB (model # 7951) and the ability to record photos and videos. But what is certainly noteworthy is the wifi that allows you to view in real time what we are observing with the instrument, a decidedly not unusual situation for example when carrying out censuses. In fact, we think of the exit of two people, one of whom is equipped with a thermal viewer who carries out the observations and a second in another position or even on board a vehicle who, comfortably from his mobile phone, can observe in real time what the colleague is filming, always with the ability to take videos or photos.

Speaking of model # 7951 The field of view and the zoom of 1.4x-3xallow for amazing observations, as well as the OLED type monitor is of a high standard and makes the images sharp and contrasted. 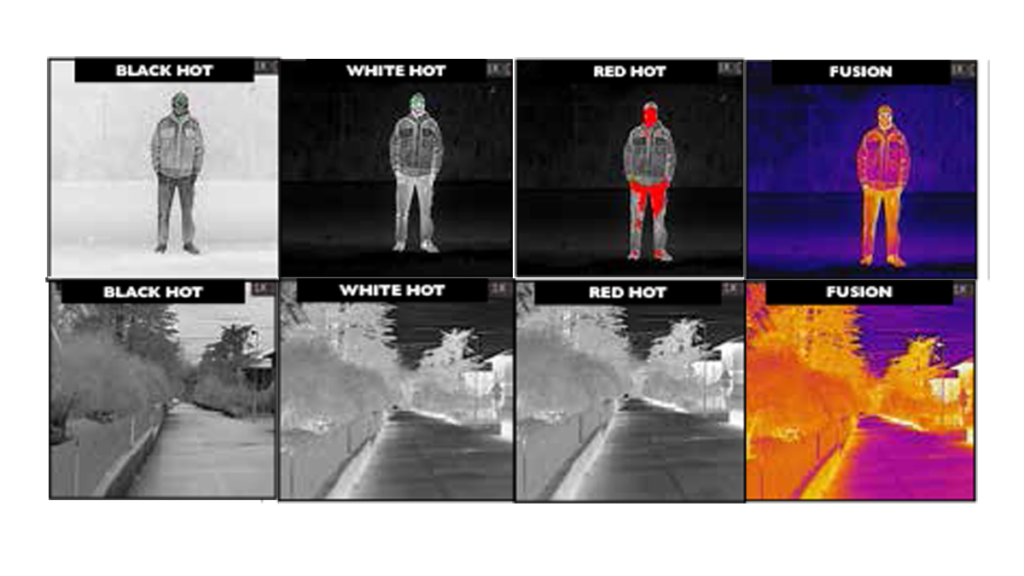 The image is displayed both in: 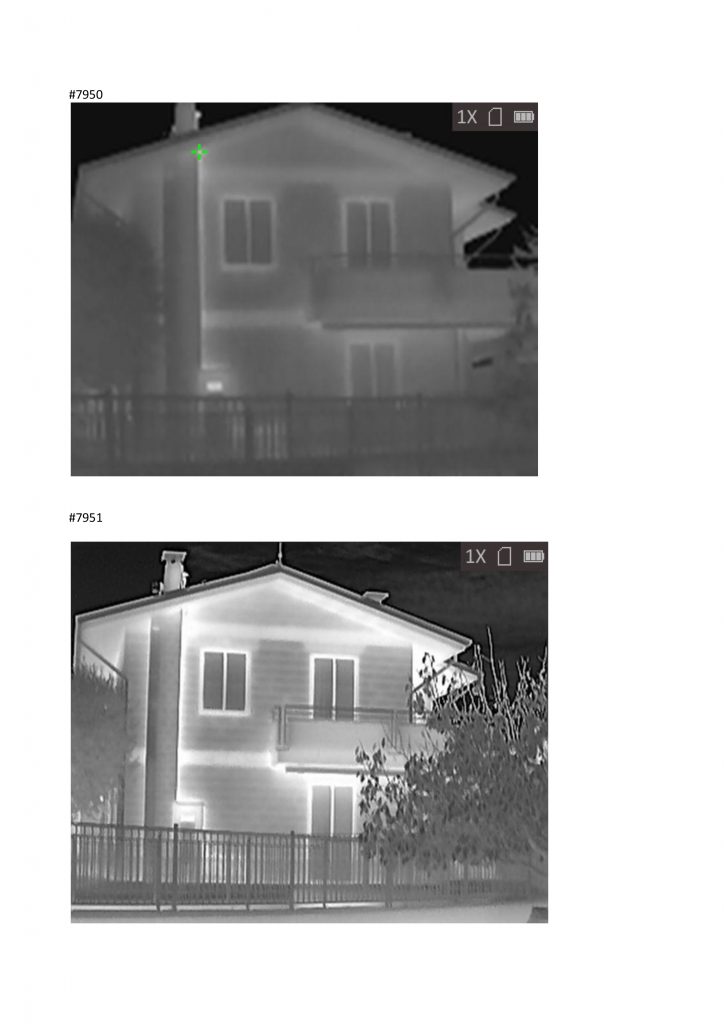 In the technical data sheet of the products we consider it necessary to explain the NETD parameter that is declared inside the thermal module: this figure which for both models is less than 35mk places them ina range of excellence as values ​​below 40mk are the best for this. evaluation and are proof of really good tools.

NETD stands for Noise Equivalent Temperature Difference and is a recognized parameter that has a value to distinguish differences in IR radiation.

The frequency of the images is also an element that must be carefully evaluatedin the purchase of a thermal viewer as no more than two years ago on the thermals there were models with very low frequencies (for example 9Hz) while both Flame models have a frequency 50Hz which is normally the prerogative of models of a very different price range.

The model # 7951, on the other hand, has a duration of up to 5 hours continuously with the Wi-Fi hot spot offand is suitable for use at temperatures ranging from -30 ° C to 55 ° C.

Both are water resistant and submersible according to the IP-67 standard, i.e. water does not penetrate in case of accidental fall into the water and recovery or in case of immersion in stagnant water up to a maximum of 30 minutes, we also remind you that this reference confirms that they are completely anti-dust.

The possibility given to have two distinct models arises from the fact that in the thermal vision there are those who make a minimum use of it perhaps for their own passion and have difficulty in motivating the investments required for this kind of article at high levels. With a truly affordable expensehe is thus able to distinguish the images and to be able to take advantage of the functions of a versatile tool so instead the professional user will be amazed by the level of quality offered at the price at which the # 7951 Flame is in the store. 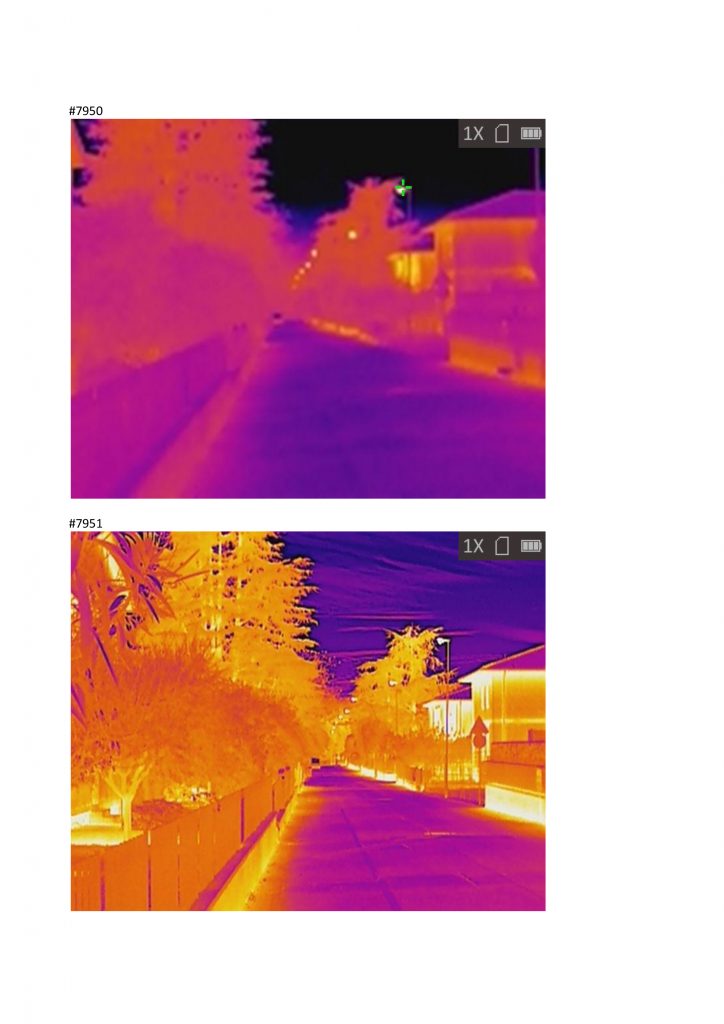 Some customers are perplexed to abandon the expensive night vision device to switch to a thermal but the advantage is evident as for example in a hunting or wildlife setting being able to identify the animal even under hedges, bushes, branches or under the snow is a great plus. Furthermore, for those who practice selection hunting there is the need to recognize the type of animal and have a precise idea of ​​the dimensions: with a thermal viewer the shape will be more defined than a nocturnal one and this greatly facilitates the identification operation. The perception of three-dimensionality that occurs with the thermal compared to the decidedly higher night is also different. It is not uncommon that with the nocturnal in tow it is not possible to see an animal while perceiving its noise and instead with the thermal one instantly catches it.

You certainly won’t expect to have such sharp and smooth images at this price!

Get your fill of enthusiasm and then get ready for a wonderful experience with Konus’ Flame viewers.