Our long distance shooting optics have dominated the competition also at the short distance with a moving target.

Our friend Giuseppe De Luna participated managing to get on the podium and taking home the individual bronze medal in the Seniores category and the gold medal in the Team category with his Team using our KONUSPRO M-30 10-40X56 scope.

His son Cristian also took part in the Championship, who at his debut managed to win an excellent 4th place in the Juniores category after a great performance. Cristian is currently the youngest shooter in Fidasc at 15 and therefore deserves our full attention. He used the same long distance rifle scope used by his father.

These are the news that fill us with pride, especially considering the difficulties with which this sporting season has started.

A heartfelt thanks goes to the FIDASC CONI Federal Center in Campagna and to the President Massimo D’Ambrosio who, thanks to his availability, gives Giuseppe the opportunity to train and perfect his technical skills to try to achieve his goals.

Further satisfaction comes from the interest of young people who have been approaching the Campaign Shooting for a few years and who are finding more positive feedback in the Konus brand than other brands. Giuseppe made himself available this weekend to clarify doubts or perplexities and to give his testimony on the use of our shooting optics. A really valuable opinion given the years of experience in which he was able to “touch” our scopes and use them for important competitions in which he has always left his mark.

This sensitivity towards the new generations is the focus of our collaboration and we could not find a more suitable testimonial thanks to the passion he managed to pass on to his son who, despite his young age, is really making his way quickly.

Both Giuseppe and his son Cristian shoot with our long distance scope model cod. 7286 KONUSPRO M-30 10-40×52 which Giuseppe baptized “my faithful M30”. It is an iconic optic   of the Konus range that stands out for its 30 mm diameter tube, the illumination of the reticle with five intensities and in two colors (red or blue) and for the engraved reticle positioned on the second focal plane.

The M-30 long distancheshooting optics have an internal level bubble to have the perception of alignment at a glance.

The adjustments of the turrets are of a tenth of a Mil and on the side there is a parallax ring with an oversized wheel. It is an optic suitable for both the well-established shooter and the novice who looks with curiosity into this sporting world so rich in stimuli. An authentic “workhorse” for Konus who for nine years has been selling it all over the world, collecting truly enthusiastic testimonies. 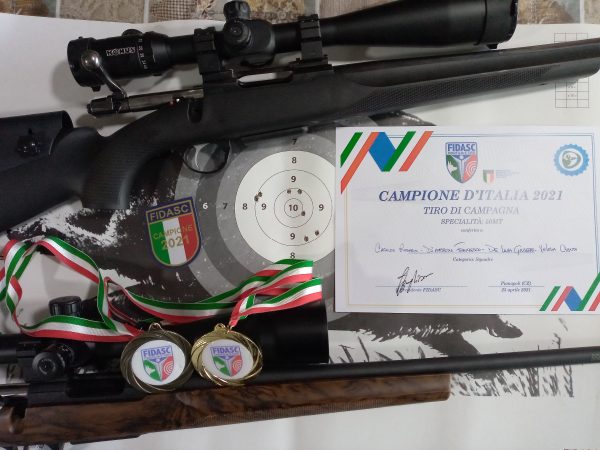 In rejoicing therefore for the results achieved, our interest is always great in following these two generations of shooters at work. We update ourselves at the next exciting races with the desire to always support them!