Fairs 2022: Konus articles that made an impression

Konus has sold out the exhibitions scheduled for this year 2022. The 2022 novelties that have really excited have been different and well distributed between the world of hunting and shooting.

Since this year all exhibited thermal visors Konus could not be less with its two monocles and with the thermal rifle cod. 7952 FLAME-R particularly appreciated for the wi-fi function, the possibility of making video recordings, and the included picatinny sled.

The new Absolute #7179 optics was the flagship of this edition because for the first time the famous “ED glass” or “extra low dispersion glass” has always been the preserve of high-end brands, enters the Konus universe.

A great innovation, in practice a special optical glass that, thanks to its composition, has the particular characteristics of purity and sharpness that the normal glass used in most of the rifle optics on the market does not allow.

The result is an extremely sharp image even when using the instrument at very high magnification factors or over long distances or when light conditions are not ideal (sunrise and sunset). It is an optical system with undoubted advantages.

In particular, the operation of the magnifications is facilitated by a lever that is also suitable to be used with gloves, there is the parallax, the lighting, lockable and resettable turrets and a huge price advantage.

In the past, an ED optic went well beyond €1000 while in this case, it is possible to have a competitive price as per the mission of the Konus brand. 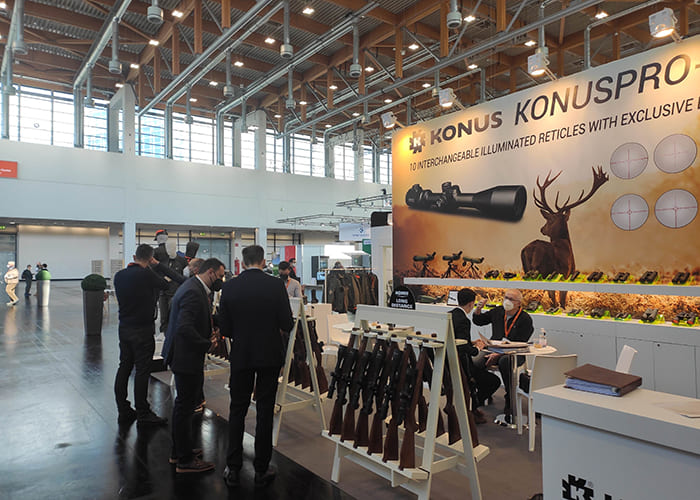 The peculiarity of this line is given by the extremely wide field of view and a new optical system with high performance and impressive image quality.

The image is high resolution, distortion is minimized and ultra-white optics allow you to channel a large amount of light to obtain very clear and contrasting images.

The lenses are water repellent and the new turrets of tactical type allow a precise adjustment to quick reset.Finally, several customers were able to see live the optics #7331 KONUSPRO EL-30 that came out on the market in the terrible year 2020 but that for problems Covid had not been able to “land” in Iwa Nuremberg and therefore despite many markets and retailers have already tried it there was still those who had not had the opportunity to touch this exclusive product that only Konus can offer. 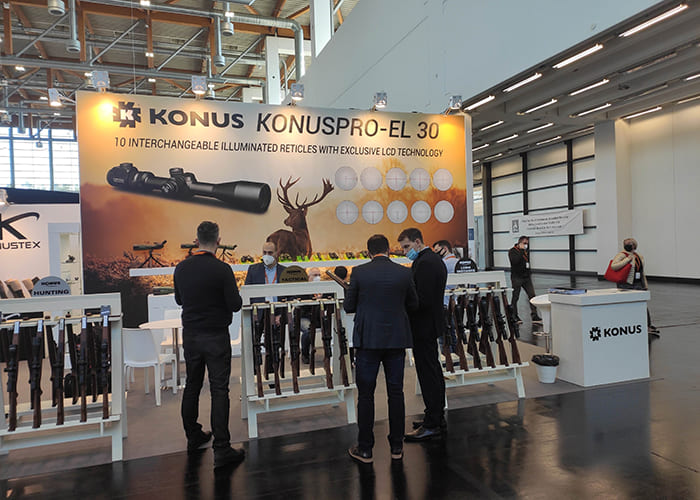 It is a lens with 10 interchangeable reticles thanks to advanced LCD technology.

The innovation of the LCD panel in the optics had already been presented by Konus with the model #7330 which was a best-seller about 3 years ago, but now with this new model we wanted to refine and evolve this technology by creating a model with a parallax wheel particularly interesting thanks to the position on the zoom adjustment.

In addition, the optics were also equipped with lighting, so we tried to meet the demands that public and operators had made us to have a superior model for those looking for a more complete optics.

Glory optics were then exhibited, also for a year on the market but unfortunately at the first presentation in a European fair given the suspensions had.

Certainly looking inside was for many people a wonderful surprise that highlights once more the level jump that Konus has been able to achieve in a few years.

These optics are characterized by the magnification factor 8x and the lockable turrets pull/ release, resettable to zero.

The erector tube is newly designed and guarantees greater reliability on large gauges.

Also the Empire series was released in the Covid period and therefore several foreign operators had not yet had the opportunity to see live these two products characterized by a 6x magnification factor.

Interesting is the side wheel with parallax adjustment, the internal level bubble and the lockable turrets with zero block.

The eyepiece is equipped with quick focus and both optics are waterproof and impact resistant. 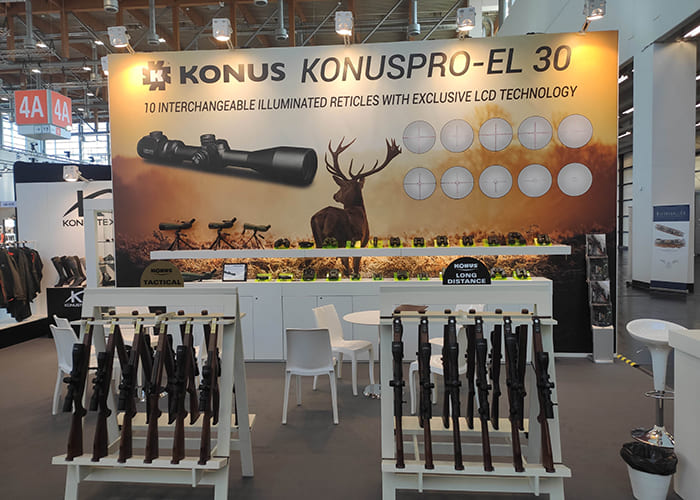 As a riflescope for night vision, the proposal of Konus is the model #7871 Konuspro NV-2 that represents the improvement of an earlier version now enhanced and more powerful even in day vision. First we have from 3 to 9 magnifications on a diameter of 50 mm.

The adjustment is 1/10 mil and the focusing system has been renewed. The eyepiece has also been modified with a longer eye relief.

The base is suitable for Weaver and Picatinny sled. For the day you can use the tool with three different functions: color, black/white and green.

The built-in zoom illuminator allows viewing even in total darkness.

The additional filter allows you to increase the contrast of color images in daytime viewing. The optics were then improved in resistance to strong recoil. Supplied with AV cable, USB cable, two rechargeable batteries, 8gb sd-card for video recording.In short, the Konus innovations continue without limits embracing different technologies in order to satisfy and sometimes even surprise… believe.